on August 24, 2009
Find myself sitting at the airport again. The time lost to this unfortunately necessitous aspect of modern travel is the only real downside of getting to travel and attend the trade-shows, conventions and developers conferences. Some days I think someone really needs to hurry up and invent teleportation but then on second thoughts I think I would actually quite like to retain all the quiet spots in the worlds that are hard to reach but wonderful and worth the trek...so I guess I'll just have to let my imagination live with airports.

Cologne was a great city, fantastic Cathedral with an awesome view from the top of its not-so-awesome to climb 100m high belfry, friendly people, good transport options and generally somewhere that has been duly added to the list of places 'I must come back to if I get the chance'...so thumbs up there! 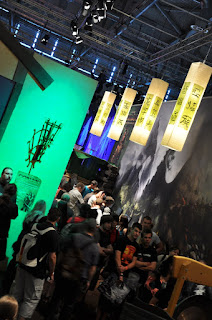 The convention was hard work, but both productive and fun. It all went strangely smoothly in an almost spooky way, virtually no technical hitches of any variety, which is not always the way at such shows, so no complaints there either.

It is always great to actually get to meet the people who plays the games. So while the shows that allow the public to enter are most definitely hard work, they are also often vastly more rewarding from a personal point of view. It is after all those players that we make games for, and seeing the genuine enthusiasm from players always reminds me why we do this job in the first place.

The press previews also went very well, lots of interest in the game, and virtually everyone who scheduled an appointment made it. The business area acts nicely as a little oasis of calm during the public shows, but thirty seven presentations later I was actually glad to get out on the showfloor again!

I didn't get too much of a chance to see too many other games. Between the booth and the business area they kept me pretty busy so there was, as I suspected, lots and lots of great demos, trailers, and general coolness that completely passed me by. Will have to do some surfing when I get back and catch up on all the stuff I could have seen for myself.

...oh, and lastly, custom-case modders of Germany I salute you, the custom PC cases on show at GC were awesome, but one stood out. For me you just can't beat a steampunk inspired case-mod that actually doubles up as a toaster, and actually makes a decent slice of toast...by far the coolest thing I saw at the show! 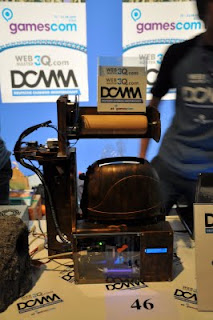 Next up, a week in the office before more travels to Seattle and the general direction of PAX.
Games Industry gaming MMO travel

Tom said…
Hey! I can't remember the FC booth had chairs for the PCs ;) I played quite a bit of the game friday.. standing mind you!

It was a good show and the FC booth looked amazing. *smashes stuff with his blow-up sword*. I talked quite a bit with one of the FC guys there, he even spoke some Dutch! The presentation (which was always crowded as hell) was all in German, though. But he was able to tell me everything and then some about the expansion and things to come before that.

Anyways, I had a great time there. I dropped by a few times a day hoping to run in to you but as you mentioned on your Twitter you were almost booked full!
August 24, 2009 at 10:05 AM

Unknown said…
Looks like it was a good show wish I cudda been there and seen the expansion stuffs.