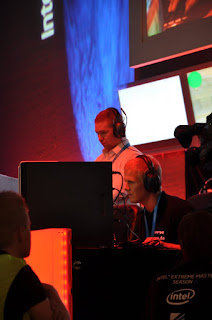 Nervous looks of concentration on the faces of the competitors, a place in the final on the line, a dramatic comeback from one side leads to a tense double overtime period, the gasps from the crowd as a skillful move is pulled off with finesse to tie things up, enthusiastic commentators discussing tactics and the final shot on the big screen of one of the losing team, head in hands, clearly wondering where it all went wrong.

Scenes that would not be out of place in a football stadium, a basketball court or an ice rink...this time however I am sitting on the floor in the esports area at Gamescom watching two teams compete in the semi-final of the ESL Masters series...and they are playing Counterstrike.

Gaming has come a long way over the last decade and watching something like this, with it's professional production values, branding and sponsorship it really reminds you where part of the industry is heading. Esports is already firmly established in several regions (take a search of You Tube for Starcraft tournaments in Korea). While clearly still a niche interest, does seem to have some real momentum in it's favor now. I wonder if in twenty years time having attended a competition like that is something the next generation will sit and listen to stories about or if it will be a passing interest that will slip away again unnoticed by the mainstream. 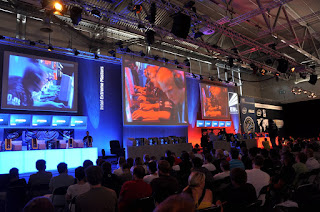 It was certainly a compelling experience, and you couldn't help but get caught in the genuine emotions of the fact it is a competition, and competition between two closely matched teams is usually at the very least interesting no matter the setting, throw in a crowd and live commentary and you just might be on to something.
gaming