on September 05, 2009
Another day down at the PAX convention in Seattle, more interviews done, more players and fans met and more of just generally enjoying the show.

Aside from the work and the cool stuff that I don't always get to see because I am working the booth there is one part of the current gaming space that never ceases to amaze me and captivate me in equal measure and that's the Guitar Hero / Rock Band phenomena. Now it should be noted I suck at the games, really, really, suck...anything past medium on the guitar and I am completely floundering, but what these titles have brought to gaming is inherently quite cool. Quite apart from the social gaming elements, and the opening up of the genre to new demographics is the fact that these games are bringing some great music to a whole new generation. 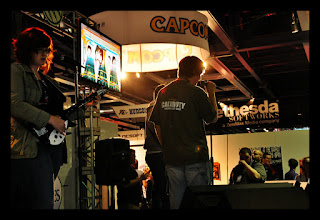 The hit of the show here at PAX is of course the new Beatles Rock Band edition, and it seems like a great addition to the series with exceptional production values. I have been having great fun just watching people play it at the Harmonics booth, which is close to ours. Standing there watching a ten year old blaze through 'Paperback Writer' on expert mode on the drums I couldn't help but be hit by the thought that another entire generation is getting to engage with some really great music in ways that probably wouldn't have happened before...not only are they listening to and liking their parent's music (or in some cases there parent's parents music!) but it's actually cool thanks to the medium through which it is being delivered.

Around the corner from the Beatles stage a group of teenagers were playing along to an Oasis track. Rather than suddenly feeling distinctly old at the thought that I was listening to that album most likely before most of the kids on the stage were out of diapers I got kind of a warm feeling because the music I loved and listened to growing up is being passed along this way.

As we were chatting about it over dinner, one of our guys commented that he had overheard his eleven year old son whistling along to a David Bowie track last week and asked him how he came to know the song and was told quite simply that it was a track on Rock Band that was really fun to play....times they are a changing...
gaming Music

Slith said…
We are living in a refried culture of Transformers2 and spidermans 3 (in other words: crap) so no wonder people turn to classics.

Craig Morrison said…
..sitting in the airport in Amsterdam waiting for my flight back to Oslo and reading a really good article on the Beatles in this month's Rolling Stone...apparently some research institute believes that the 'generation gap' has been greatly reduced due to bands like the Beatles precisely because they continue to appeal across generations, so maybe it gets even scarier...Rock Band and Guitar Hero may actually be contributing to improving the fabric of our society :p
September 8, 2009 at 1:51 AM

Craig Morrison said…
I like some of Pink Floyd's stuff when I am in the right mood, not the biggest fan, but I could see that making a very interesting Guitar Hero or Rock Band edition given the bands theatrical leaning in the first place...could be some good mileage there
September 22, 2009 at 2:13 PM