Astonished by the X-men again... 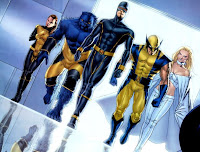 ...ok, maybe not actually astonished but certainly impressed by the release of the Astonishing X-Men motion comic for the iPhone. Quite the list of cool stuff appearing for Apple's little gadget of late. I am fast becoming impressed with the variety of applications being found for the device. This time out it's Marvel taking one of their better X-Men runs to iTunes in the form of a 'motion comic'...which is somewhere between an actual animated series and a digital version of the original.

Taking the Joss Whedon penned 'Gifted' storyline the translation works very well. The production values on show here are higher than I expected when I first heard about the project. John Cassady's panels come to life in the semi-animated format, and it really seems to suit his original art style nicely. The voice acting is also pretty decent, better than I feared you might find for something of this kind. The only issue with the package I might have is with the price - at the same price point as a full length TV show, it's a little hard to accept a ten minute chunk being relative value for money. That said the full season pass on iTunes runs to $9.99 which is probably what you would pay for the trade paperback of the same run, so maybe it's not that unreasonable. If the price doesn't put you off though it is a novel way of enjoying a comic, and personally I think there is definitely some mileage for the format if the chosen series or run is the right one...and from what I have seen so far, this one fits well.

I am not usually a mainstream 'superhero' comic fan, but usually get drawn in when a writer I know I will enjoy is onboard for a given run (anything by Warren Ellis, Neil Gaiman's run on the Eternals being another good example) so I read this first time around to see what Whedon made of the X-men and wasn't dissapointed. So if you are either curious about what exactly a 'motion comic' looks like or just fancy picking up a good run in a new format this is well worth checking out.
comics