on November 22, 2010
Ahhh, some downtime at last after a busy few weeks. Office has been it's usual hectic self and have been busily getting things set up at the new apartment (Bed, sofa, TV and consoles all now in place so it is officially livable in), and generally getting everything finalized in Montreal, so the chance to take a break this week to visit with the in-laws for Thanksgiving, and catch up on some posting, is well timed. 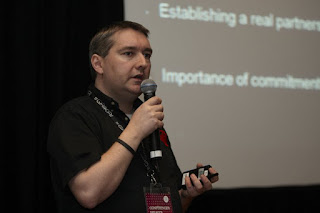 The Montreal International Game Summit went very well. It was good to get to meet a lot of the other speakers. While the summit is not on quite the same scale as GDC or the like, the size actually gives it a much more cohesive feeling. You actually got to spend a decent amount of time talking to people and learning from some of your peers.
Managed to have the kind of longer, more involved discussions with people that you sometimes don't have the time for at the huge conventions where everyone is in a rush. Had a really interesting conversation about games and writing with Alex Epstein, and comparing where the industry is in relation to the film and TV industry.
The session went smoothly and people seemed to be interested, which is always your primary concern when being asked to stand up in front of people and speak. No matter how many of these things you do it is always makes for a few nerves beforehand, but it is fun and I'll never tire of sharing lessons learnt that might be beneficial to others!
The organizers were all really nice folk, and it was great to get to be involved. It is one of the things that I am looking forward to in Montreal, having a thriving and energetic development community in the city, so hopefully will get to interact more with it over the coming months!
Games Industry Montreal