Just something about getting to put pen to paper...

on December 18, 2010
I like technology. I really do, I love gadgets, and all the advances that power our imaginations and serve to frame our lives in this day and age. However, when it comes to writing, in particular my own notes, and random scrawling. There is just something satisfying about putting pen to paper and actually writing...on paper... 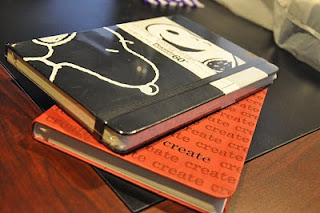 I know I will eventually transfer anything that works into an electronic form, and it will be filed digitally with the rest of my fast growing collection of unfinished 'stuff', but I have to admit I do just like to write sometimes. There is something about it that triggers some of the old imagination that I had as a kid, the action of writing taps into something there.
It also means I occasionally get to find some nice notebooks. I generally keep one at home, and one in the office, so tend to pick them up two at a time. I like shopping for them. I mean, if it is just for taking the odd random notes, then it's ok to have even just a cheap notepad from a stationary store, but when I am in the mood for some writing, I really like to have a nice solid journal to write in. It also means I am far less likely to misplace them!
...so for me, there are some things that can continue to live alongside all our cool technology, even if they are occasionally seen as a little old fashioned.
writing