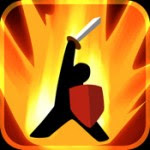 If you haven't heard of it yet, Battleheart is a new iOS RPG for the iPhone and iPad courtesy of the folks at Mika Mobile. You can find a good review of the game here.

It has a definite retro charm, with a charming graphics style that is both modern yet nods firmly in the direction of Zelda and the like. The really cool thing about the game for me is the control scheme. It is a fantastic example of how to use the interface for a specific platform to your advantage. The entire affair uses the touch and draw controls on Apple's devices. Even when the action gets frantic, the controls mostly stand up, and even work on the iPhone. I first saw the game played on an iPad and I worried that the controls wouldn't translate as well on the smaller device, but they do. I have been thoroughly addicted to the game while travelling on this current trip to California.

It is a great example of a simple concept, very well executed. It ramps up the difficulty at a decent pace, is rarely frustrating, and the development of your cast of characters is pleasantly varied, with lots of different possible tactics. If you are looking for a light and interesting diversion from your more serious gaming endeavorers you could do a lot worse than check this one out!

Rodi said…
Thanks for the wonderful tip!
This game has all the bare essentials from a gameplay perspective.

Though I do seem to miss some depth; especially in meta-game (number of different allies, number of items), but that might change as I'm only just starting out.
March 14, 2011 at 5:11 AM

Craig Morrison said…
Aye, it doesn't get that much more complex in terms of enemies (although the boss fights are well thought out), more that they increase the pace and timing, meaning the triggering of your teams abilities becomes more vital...although I am not all the way through yet either...

I hope they add to it as well over time, have really enjoyed playing through and leveling up the different heroes.
March 14, 2011 at 5:26 AM