on March 31, 2011
...except it wasn't a movie at all, at least not really.
Just saw Danny Boyle's stage adaptation of Frankenstein, that was being played in the cinema here as part of the UK National Theater's 'Live' events program. I was a little skeptical going in, as I wasn't sure how a stage performance would translate so directly onto the cinema screen. These events had received some good press though, and as a fan of Danny Boyle, and the actors involved, we picked up tickets and went along.
We didn't regret it! 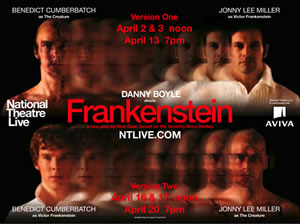 The performances were brilliant, both leads, Benedict Cumberbatch and Johnny Lee Miller (who has come a long way since Hackers), are excellent. On the West End in London the two actors actually alternate their roles every other evening, with one playing Dr Frankenstein and the other playing the monster of his creation. The performance that was filmed for this event, was one where Miller played the creature. The idea of the two switching roles, just makes me want to see it again, I can imagine each brings something different to the role of the monster, as in this telling, the creature is very much the focus of the tale.
The stagecraft and set take a very minimalistic approach in places, but are very effective. The script itself might be a little clichéd in places, but the as always with a good stage play it is the performances that have the most impact. This version gives the monster greater intelligence than I remembered from the novel (but maybe that is simply on account of it being probably close to twenty years since I read it!) and it does make things feel a little different than previous cinematic interpretations, since as he displays more intelligence you can easily argue that the creature deserves less and less sympathy, despite how humanity treats him.While the script makes efforts to inject the occasional lighter moment, it is certainly a dark retelling of the tale, but one well worth checking out if you get the chance.
movies