on July 27, 2012
It's not often you get the opportunity to fulfill a genuine childhood dream. Yes, I have what many would call a dream job (and it is), but that's a distinctly adult ambition. I'm talking about those things that reach into you and pull you right back to when you were ten years old. Last night I got experience just that. 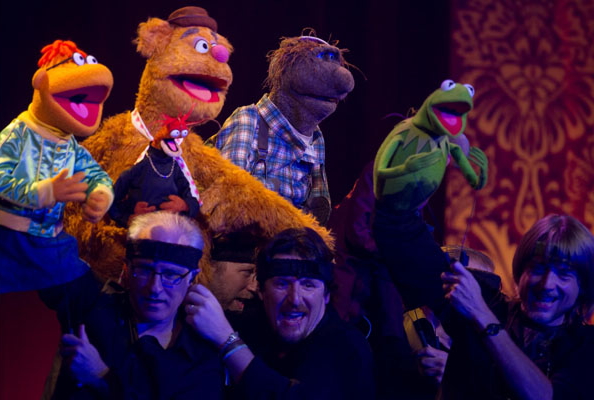 As part of the thirtieth anniversary of the annual Just for Laughs festival here in Montreal, the organizers convinced the good folk from the Jim Henson Company to put on an actual Muppet Show. They don't do this very often, if at all, so I was very lucky to be part of the few thousand who managed to snag a ticket.

To be honest part of me was a little skeptical going in. How were they going to pull it off? Would it only serve to ruin childhood memories?

The set-up was perfect. On stage you saw the Muppets, complete with the puppeteers, so you could see how everything was done. If anyone has seen the stage show Avenue Q, it was kind of the same, except here they also showed you the 'TV view'. They had large screens set up all around the theater so you could also watch the Muppets as they would have appeared on the TV. i.e. shot from the waist of the character up, so that you don't see the puppeteer below. It was an ingenious combination of stage craft and  television production.

For their part the Muppets themselves were quite simply everything you wanted them to be. The show was practically a perfect rendition of what we had grown up with. Fozzie told bad jokes, Statler and Waldorf (who were actually set up in a booth with the audience were they always were!) heckled, Kermit and Miss Piggy sang, the Swedish Chef made poutine (and promptly had a heart attack), and Gonzo had to fill in for Cirque du Soleil with his own interpretation, aptly named 'Cirque du Poulet'. It was all very pitch perfect. The people that bring these beloved characters to life are truly amazing folk, and it was great to actually get to see them perform.

The comedians also put on some good performances, and to be honest it was nice to sit through a slightly more family friendly set of comedy routines that didn't rely on foul language or sex jokes to keep things ticking over. Maybe it is a more naive appreciation of what comedy can be, but it fit perfectly with being part of this very special Muppet Show.

Which has always been the root of the magic that the Muppets inspire in people. They appeal to the kids, and the big kids in all of us. No matter how cynical the times, or how much the bitterness of age sets in, its virtually impossible to be immune to the charms on show when Jim Henson's most celebrated creations take to a stage.

If this ever happens again, anywhere remotely near where you live, go, just go. No childhood memories will be broken, I promise!

Ten year old me would be very jealous of grown up me right about now.

Anonymous said…
The Muppets!
Whoe does not like them?

Licon Boss said…
If you need a custom theme design, then definitely you should hire web developers. WordPress is a great platform, but there are many technicalities involved. It will be the best idea to hire a Wordpress Development Company that offers affordable and customized WordPress development solutions.
March 1, 2022 at 3:33 AM