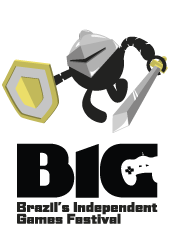 Next week I'll be in Brazil for the Independent Game Festival being held in São Paulo. I'm going to be giving the key-note speech on the design track on Tuesday morning. It's both exciting and a little scary, in particular as it's the first time I've been asked to give a key-note. Expectations to meet and all that!

There are lots of great games nominated through the festival, some of which you'll probably have heard of, some of them might be new to you, so make sure you check out the list of the nominations here.

And on the off chance that you're in São Paulo next week (and the Google stats for the blog suggest at least some of you may hail from Brazil) come by and check out the games on show!