on October 22, 2014
Last weekend we had a great adventure in the desert. Mostly magical, with a few unexpected twists that required some extra navigation. The Rise Lantern festival was something I'm really glad we did. 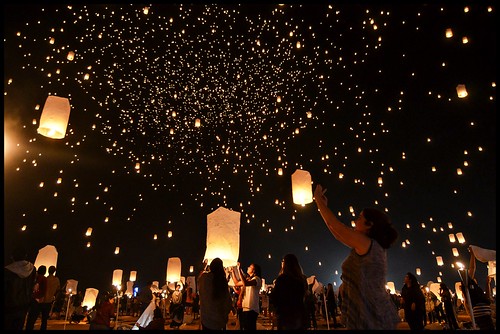 Inspired by events of this kind from Asia a group got permission to do a massive night time lantern release event in Mojave desert about an hour out of Vegas.

The event itself and the release of the lanterns was amazingly ethereal.Words don't really do it justice ... in fact pictures also can't completely capture that feeling, and while even video doesn't tell the full tale, I threw together some of the footage from our cameras as a little memory capsule for us.

The light, the lanterns, creating our own little constellations of would be stars is all very captivating.

That wasn't quite the end of the adventure however.

We were apparently lucky, in that we actually got away from the site in the desert without too much hassle, and when I say 'too much' I may be being more than a touch forgiving. We did wait for over an hour in the dark, by the side of a desert road, with an almost complete lack of transport organisation and communication. We were lucky that one of the equally frustrated bus drivers who had been hired for the event gave up waiting for directions from the organizers and just pulled up next to the small band of tired and irritated looking people we were stood with, opened his door, said 'The Rio?' and let as many of us on as he could.

There were a lot of folk that were left stranded in the desert for quite a few hours. So much so it made the local news for all the wrong reasons

It's a shame as the event itself was amazing, but they ended up in the news for all the wrong reasons. The organizers were woefully unprepared for the crowds leaving the site. I hope they can get their act together and do it again with far better organisation, because it was actually pretty magical and I'd love to do it again.