Saga is probably my favorite currently running series. It's fantastically divergent science fiction with a heart as big as it's ideas. This is not your regular space-ships and aliens science fiction, albeit both feature prominently.

All great series work on the strength of their characters, and this is the beating heart of Saga. The story is effectively a family drama, narrated by Hazel, who is relating the story of how her parents met, and how she was born and raised. The parents in question coming from different sides of an ongoing conflict between two alien races.

Their very union posses problems for the powers that be, and thus they spend the series on the run various forces out to see their relationship ended, forces who don't care if that means killing them. 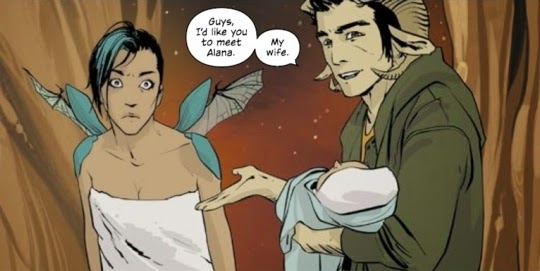 Brian K Vaughan and Fiona Staples have created a world so unique and strange that it manages to challenge your expectations about what to expect. Thus, when stuff gets stranger, or weirder, and it is does, it feels like the most natural thing in the world. The 'villains' of the piece are well written and often even sympathetic. 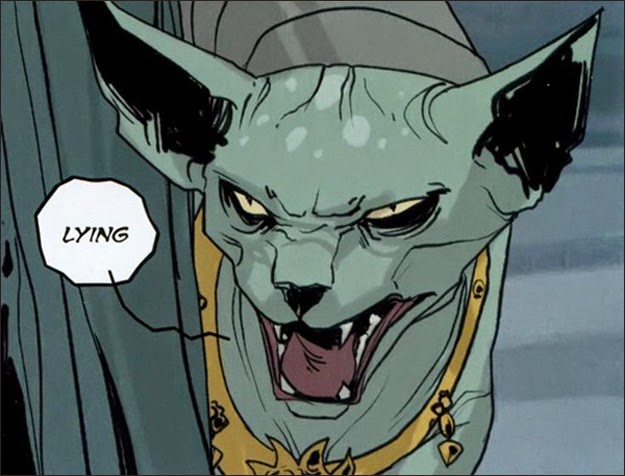 The bounty hunter hired to find them, The Will, is as good a character as has been created in recent times (and his companion the Lying Cat, who can tell when someone lies, is a great addition), but to be honest the entire cast of weird and wonderful aliens is a joy to behold.

Did I mention that the ruling royalty of one of the factions are creatures with televisions for heads?

At the same time, the story never strays from it's personal narrative about family, love, and loyalty. The story is really about these two parents trying to do what's best for their child in a very difficult situation. Likewise, they are from two different races and cultures, which generates some wonderful moments as the couple come to understand each other more. (or fail to do so!) That's what generates the true drama.

I often feel that comics are the best format for this kind of science fiction, as the long form format gives the creators the opportunities to flesh out their world, and grow the mythology of their universe on a much wider scale.

Saga is a great series, and if you are not reading it already, you should start now!