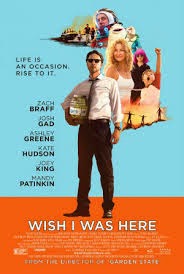 This is the second successful Kickstarter campaign on this list, and I have to admit to a soft spot for the crowd sourcing platform. For me, it is fast turning into the equivalent of what late night shopping channels are to drunk people.

Parts of the internet seem to have some issue with Zach Braff in a way I've never quite understood. I liked Garden State, in a 'right voice at the right time' kind of way, and loved the soundtrack, and Wish I Was Here pretty much follows that template.

Everyone feels a little out of place in modern life right? Right?

It's another story of searching for meaning in your life, just a decade or so on, but not in a way that real people experience. It's more in a way that screenwriters wish people searched for meaning in their lives. In many ways it's kind of a writers wish fulfillment, even if it's trying earnestly not to be 'a Hollywood movie'. It can't help but be seen, at least partly, through the lens of all the 'finding yourself' cliches that have gone before it. It's not however, necessarily any the worse for that, as it's a charming script that is well played. There is just the right blend of humor and character drama that you can forgive it the frayed edges.

The performances make a movie like this, and the cast do a great job. Kate Hudson and Mandy Patinkin turn in touching, grounded, performances that anchor proceeding admirably. As with Garden State, the soundtrack is also a genuine star, again showing Braff and co have an uncanny knack for picking the right songs for the right audience. This won't be everyone's type of movie, but it's well worth the watch if it is.