This last weekend I took part in the Global Game Jam event. With the local effort being run out of the nearby campus of University of California Irvine it was the perfect opportunity to get in on the development fun.

The event brings together developers from all disciplines and levels of experience to try and build a prototype game in a single weekend.

Games are hard to make at the best of times, so doing so with a group of strangers, on a tight time limit could be daunting. However in my experience most everyone who takes part looks upon on it as a fun learning experience and a chance to try something different. I also really appreciated getting the chance to see first hand the level that game students are reaching these days. 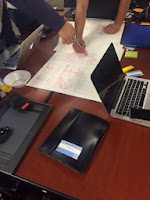 My group of seven had a decent mix of students and developers, and we were soon deep into creating a plan for our weekend project. We ended up working on an AI driven maze game where you had to guide a little robot through a space-station by placing environmental prompts for him rather than directly controlling him.


That meant the programmers involved had to come up with some needs based AI code during the jam, which was a big ask, and while we weren't fully successful given the ambition versus time ratio, we did get a version working and everyone learnt something about the challenges of creating AI.

That to me is the most important part of participating in one of these events - stretching yourself. trying something different and potentially interesting, even if it may not work out completely as you had planned.

It helps teach an important game design lesson, one the team at Extra Credits summed up perfectly when they re-posted this on the eve of the event.


It's such an important lesson that every designer should take to heart. Seriously, I have lost count of the number of times I have had that conversation with earnest junior designers, full of good intentions, who absolutely want to make a 'perfect' design.

Iteration is the key, and the sooner you learn that lesson, the further you can get in making games. 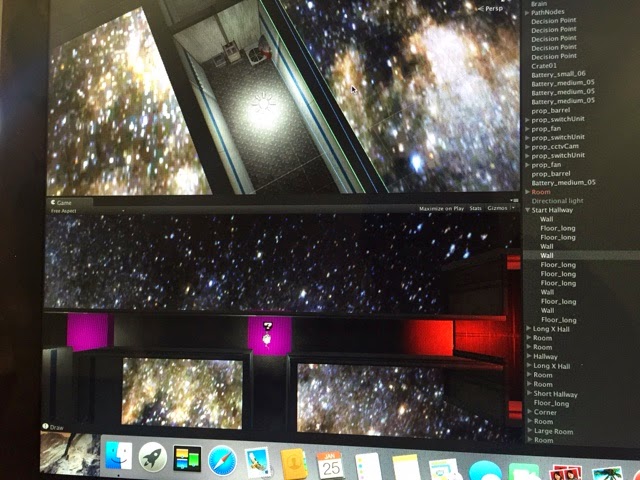 For my part I got to get some hands on time with Unity for the first time in years. In working in management on large projects you tend to drift further and further from actual hands on implementing as you go on, so I absolutely love the opportunity to dive into the trenches again, and play with real tools.


It was a lot of fun, and I could see myself playing with it a little more, if only for some personal development. That again loops back to the whole point for me. Trying something you don't know how to do already is half the fun of an event like this for me.

The first two levels I built over the weekend were terrible for sure. They worked for the purpose, but they were hardly anything that would impress anyone. The point is that, by the third map I worked on I started to get better with the editor, and started to see how it would open up, and explore what I could do with it. We didn't end up using anything other than the first map, which definitely showed how little experience I had with Unity as an editor, but that doesn't matter. I learnt something.

Likewise our programmers struggled with trying to make the AI work in what was effectively a few hours of work. At one stage late on Saturday evening we talked about falling back and just using the map to make some form of Pac-man clone, since the team were thumping their heads on the wall of AI complexity a bit.

However we talked about how it was perfectly OK to fail, as long as we learnt something. If we kept looking for different solutions to our problems, rather than trying to do it precisely the way they first thought it would work, then we might be able to get it working.

We did (and when I say we, I mean all the programmers got it working, much smarter folk than me were on it!), and the team then got the satisfaction of having found solutions to a difficult challenge as opposed to simply creating something they all already knew how to do.

That's what you can learn from a game jam.

I would definitely encourage you to seek out these kind of events if you have an interest in game design and making games for yourself.

Don't be afraid, as its one of the most supportive and interesting ways to get some insight into the process of actually creating games. 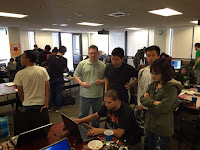 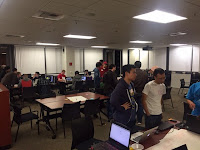 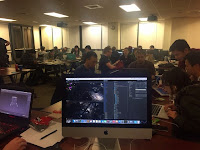 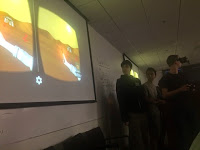 The event at UCI, which saw seven teams finish their games, was just one site in a world wide event that saw over twenty five thousand developers work on over five thousand games.

It has never been easier to get into making games for yourself, and this is another great avenue that people can explore.
Game Development Global Game Jam 2015