on January 11, 2015
I've now managed to get a couple of games of Infinity under my belt. It's definitely a change of pace from 40K, Warmachine, or Hordes. The armies are interesting, and there are some great sculpts if you like yourself some slightly manga inspired science-fiction action. Personally once I saw a faction with Akira styled bikes and cyborg ninjas I was in! So I finished up around 300 points worth of the Japanese Sectorial Forces from Yu Jing faction and took to the battlefield.

Mainly because you usually seem to be doing most of your damage in your opponents turn due to the reactive fire system. It's kind of an expanded version of the old overwatch rules from previous editions of 40K. What it means in practice is that your own turn is very dangerous for your own units. In particular if your opponent has taken up smart positions and has good fields of fire (it's also why a lot of scenery is pretty much essential for a fun game of Infinity.)

I spent much of my first couple of games, paralyzed by indecision and fear in the early turns. It feels incredibly daunting knowing that should you reveal any of your units they are going to be shot at. They are going to be shot at a lot. In Infinity the reactive fire isn't 'spent' when a unit fires. If one of your units moves across a line of sight, it may be shot, even if the enemy has already fired that turn.

It requires you think carefully not just about this turn, but also what might happen next.

The game also flows much faster as well, as the loss of a good unit can come at any time. You won't get much value from your big ticket units if they aren't out getting shots in, but also risking getting shot back at. 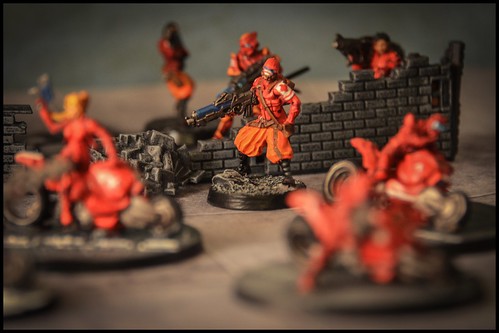 The other big 'takes getting used to' change for me is the order system that means you can move your units multiple times a turn. In fact, if you wanted to you could sink all your actions into a single unit and have it activate many times in one turn.

It changes what's possible from say, a Warmachine turn, and you now have a lot more options for fast strikes (and overstretching and leaving good units isolated, not that I learnt that the hard way or anything!)

So those two key elements combine to create a very different tactical challenge from the other games I play. It's a lot of fun so far, and I haven't even scratched the surface of the advanced tactics available through the 'Hacking' system (it's effectively a magic casting system) and the true specialist units.

I think I'm going to enjoy learning though! 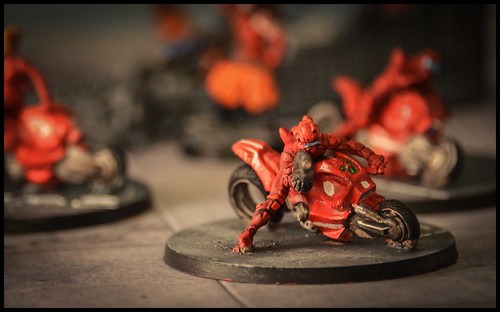 The miniatures are on a slightly smaller scale than either the Privateer Press or Games Workshop sculpts, so they also provide a test of your painting skills.