The week is done, and another visit to the annual Games Developers Conference is in the bag. Much of the thoughts after the conference are of wider trends, and how the industry is doing, and where it's headed. More on those kind of things later in another post, but first up, there were actually some games on show that I enjoyed checking out!

Yes, ok, I'm a little biased. A decade of working in Scandinavian definitely means I have a soft spot in my heart for games from this part of the world, and I got to work with many of these devs down the years. Still, I think these ones are worth tracking.

First up is Through the Woods by Antagonist. It's a really interesting narrative horror experience that takes a good deal of its queues from Norwegian movie Trollhunter (which if you haven't seen, drop everything and go watch it now, it's awesome! Really, it is, yes, I know it's in Norwegian, but hey that's what subtitles are for, and it's amazing) and tells it's own horror tale. The game has already been green-lit on Steam, so you can track it there as well.

It feels a little like a survival horror game, but is much more about it's narrative. The GDC demo had polished the visuals, sound, and atmosphere up a notch from their previous videos, and it is really looking the part now. The audio in particular did a great job of immersing you in the experience. The story is framed by an interview, presumably with the local authorities, who believe a woman has abandoned or killed her child. In the game however, the child has been taken by something much more sinister, and you play the role of that mother frantically looking for her child through a mysterious island.

Suffice to say you are not alone.

I absolutely loved the demo I played. It was dripping with atmosphere, and is starting to look and feel like a very immersive experience. If you liked games like Amnesia, it's one you will want to try for yourself! Probably my favorite demo I got to play at the show.

I've mentioned Earthlock here on the blog before, and from the look of their GDC demo, it's also starting to hit it's stride. It's a colorful, JRPG inspired, affair that has a few unique takes on combat, with paintings of characters offering up tactical options, and a side system where you grow your own ammo! Yes, in this world seeds grow into ammunition.

It's shaping up nicely, and it has a bright and family friendly feel to it. The demo definitely left me wanting more, and I'm eager to see if they can build out the depth that keeps you playing a JRPG.

As I'll talk about in my wider thoughts on the show there was many a MOBA inspired game to be found. Two of them though actually caught my eye a little, in so far as they are at least taking different approaches.

Gigantic looked great, and was a lot of fun in the two short games I got to try. The games has a unique spin on the MOBA norms by adding huge boss guardian creatures that you fight alongside. Each match sees you trying to power up your guardian monster through a series of objectives.

The game-play was fast paced, and fun, and each of the hero characters seemed to have a pretty distinct feel, which made it easy to identify the various types of foe on the battlefield. The heroes have interesting character and at least from an early impression there looks like there will be some depth there.

Then at a certain point in the battle the two gigantic creatures face off in a climatic battle called 'The Clash' where both guardians meet in the middle of the map, all other objectives fade away, and it's all down to an epic battle between these massive guardians.

I hope they focus on that moment more as they continue development. The maps were busy, and often side fights were in progress when The Clash started and some players on the team missed out on that moment completely. It was a minor quibble for a game still in beta, but I hope they manage to refine it, because the I love the concept of this huge clash of titans style climax to battles. All too often the final stages of a fight in MOBAs are anti-climatic as one team storms through. There is potential here to have their matches really build to an interesting crescendo.

It also looks gorgeous, I really like their art style.

It's definitely one to keep an eye on! 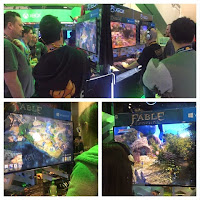 On the surface Fable Legends sounded a little like a cash in when it was announced. The cynic might worry that it was a case of someone with a reasonably well known IP trying to jump aboard the MOBA bandwagon. I heard a lot of people dismiss it, thinking it was purely some kind of odd MOBA style game

On one level it kind of is, and it might be easy to discount it if you don't look below the surface. However it's not even really a MOBA. The tactical layer of co-operative and competitive game-play actually intrigues me a little, so I was eager to try it out since the game was playable on the show floor.

The games twist on the genre is that its really a co-op experience with third person action gameplay, but the opponent is one player who uses a tactical view to direct the monsters and challenges that the players will face. 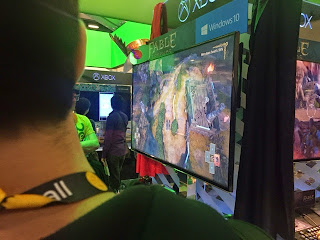 Playing as the heroes feels a little like the co-op game-play in the latest Dragon Age game, while playing as the villain offers a very different experience.

The action game-play was a little clunky in places, Mainly due to a slightly erratic camera, but they have some time to refine that during their beta.

I'd love to explore the villain options further, but the small taster of it that was on show showed some promise. I'll be watching to see how this one develops too.

The IGF area is always one of my favorite stops at the show, and this year was no different.

I got to see some more of the impressive Invisible Inc, seriously, it's like someone has crafted a game that specifically hits all my deepest gaming desires. Imagine X-Com crossed with Oceans Eleven with a dash of Monaco and you have some idea about this stylish turn based heist caper.

The game-play is already pretty polished, and there is a major new build inbound over the next few weeks. So if you've already been checking it out on early access, there will soon be even more of it to enjoy.

Lumino City was a gorgeous little game, more of a sedate puzzler than anything on this list. While I'm not a huge fan of puzzle games, this one certainly looks the part.

It was the first time I had seen Outer Wilds, which won the big prize at the awards themselves. The first moment that you realize it's interesting scale definitely draws you in, and it's one I want to explore some more.

All in all, there was a lot to see at GDC year, even before you start assessing the trends that game out of the show. More on that a little later, for now, I'm happy that I got to see so many interesting new games!
games GDC 2015 Indie Games