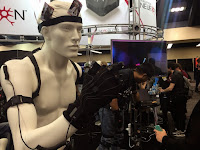 This year's GDC is in the proverbial bag. For me at least this was one of the better vintages, and I enjoyed seeing so much passion for creating games on show. Whether it was the large publishers showing off their latest games, or getting to meet students and independent developers, there were a few themes running throughout the show that jumped out at me.

So what were they?

Takeaway # 1 - All aboard the VR hype Train!

Wow people like the idea of working VR. The reaction from many, and in particular the press, seems to be that this is the time that VR will really stick. There are some already evangelizing this heavily. 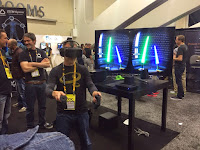 The tech was everywhere at GDC. From the buzz about the freshly announced Valve / HTC project, through Oculus and Morpheus, there were plenty of demos to see.

However, personally, I'm not there yet, and I managed to see most of the important demos that were available (albeit with a little queue time!). To me, what we have so far, are some impressive tech demos, but very little in the way of actual game.

In fact the demo that is furthest along, that of CCP's EVE Valkyrie project, does have it's moments, until, as a designer I realized that all the important vectors of game-play were coming at me from the front. It was better not to look around too much. I was talking about this with a few other developers over the week, and it was kind of a perfect example of the challenge that these games will face. The immersion possible is amazing, but, the way in which we interface with it, how we move, how we interact, how we use it to create an actual, real, playable, game, remains to be solved.

Don't get me wrong, there is potential here, lots of it, The fidelity of the experiences in the various demos is impressive, of that there is no doubt.

I'm just not sure how all of the game-plays challenges are going to be solved. It will be interesting to see where the technology goes.

Takeaway # 2 - MOBAs are where people think the money is


A few years ago you would walk a games industry convention and hear the following phrases at least a few dozen times ...

This year, you only had to look at the demos, and keep your ears open, to realize that the success of games like League of Legends and DOTA are the currently trendy template to untold riches. In theory anyway. I'd ask where many of those who had ambitions to clone the success of World of Tanks are now, and the same will probably be true of the MOBA rush.

That said, there were some interesting twists on the genre, I mentioned a couple of them yesterday, and I'm sure one or two might make the jump into the big leagues.

Seriously! With Epic announcing that the Unreal engine is now available for use to virtually anyone, and the ever growing scale and scope of Unity, there has never been a time when it's been easier to make games,

I watched Tom Francis' session on the lessons he learnt from making Gunpoint, and turning that passion for making games into a job for himself. You can literally teach yourself how to make games now. The only barrier is your own motivation. In fact Tom actually has a superb series of tutorials on his site. You can do it for yourself these days! 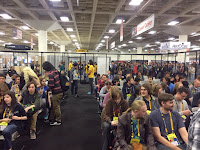 I've been telling students this for years when asked what is the best thing to do to get into the game industry ...

Seriously, it's that easy. Now, it's never been easier than it is today. There are engines at every level available freely. Between Game Maker, Unity, Unreal, and mod tools (like Skyrim or Starcraft 2) you can find what you need out there.

Throw in You Tube, and you have a virtually endless stream of tutorials. There are many excellent resources available out there. Use them!

The indie scene is thriving, the casual and mobile markets are seeing growth, and hell, AAA teams need more hands than ever to achieve the levels of fidelity and content they aspire too. The opportunities are there.

So if you want to make games, the only thing stopping you, is you.

Now is the time.

I think that's a fantastic thought to leave GDC with any year.