Wrestling with a story ...

on June 11, 2015
Sometimes a story comes easily, sometimes it does not.

The latest story I've decided to finish was an example of the latter. 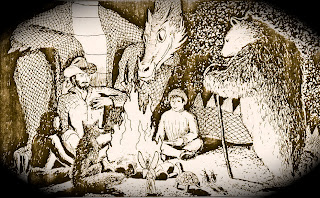 For some reasons the stories that most often crystallize in my imagination revolve around a conversation of some kind. Maybe it was the screenwriting training, maybe it's just a personal wrinkle, maybe it's because I find people, flaws and all, fascinating.

Sometimes these ideas, these concepts, tell a story, some times they just hint at one. My challenge has always been converting them into something that might be interesting to someone who isn't me. The concept is fully formed in my mind, but often the devil is in the details, and those details often are the parts not said in a conversation.

This was a story I first drafted a few years ago as part of the writing group I was a part of in Montreal. It was the back half of what is there now. I had trouble framing it, and those who read it had trouble grasping what it was actually about.

In my mind the idea was strong, and clear, but I had a real challenge translating that into words that sold the concept to the reader. It was interesting, it was one of those occasions when people weren't sure what type of a story I was trying to weave. There were other stories, strange, ambiguous, possible stories that flickered around the edges of this one. It wasn't clear whose story it actually was.

I've tried a few versions since, had people do some editing, have more people read it. People still didn't always seem to get it. I wasn't on the same wavelength as folk who read it, or I was somehow failing.

Partly it was the text, there was indeed stuff that I had to fix, pacing that needed smoothing out, lights I had to shine in areas I had neglected in the first drafts.

That is stuff that editors can help with, that being able to pull from feedback helps. I feel that it's a good sign when I start to recognize some of those things, work on them, and refine the quality of what I write.

There is an additional curve-ball to deal with however.

Why did I keep worrying that this story wasn't working?

The challenge is that those flaws in the craft, the learning process of trying to be a writer, also gets mixed up with the insecurities of a storyteller.

Is it a good story? Will people get it? Will they see the same story that so fascinated me in the first place?

I'm coming to see that I need to worry less about that, and just focus on telling the story I want to tell as well as I can tell it. Whether it resonates with any given reader or not is up to the story, that magical thing we try to bind with these words that we write.

I want to become a better writer, I will work hard, practice, learn, and seek to always improve in that regard. That's the practical side of wanting to be a writer (as opposed to someone who writes).

Part of that however also relies on being confident as a storyteller, trusting that the story itself, might just be worth sharing, but not obsessing over whether everyone 'gets it'.

The words are a craft, the story is an inspiration, a concept that almost always wants to be shared, that why it inspired you in the first place. Hopefully we are meant to share them!

So from now on I think I'll try and trust in the story.