The Rules of Exploration

Playing through three games recently had me thinking of one of the core challenges that faces games that place immersion and exploration above all else.

First up, I'd recommend all three if this type of game is up your street.

While I'm talking here about one specific things that provides a real, and interesting, design challenges, the games were all thoroughly enjoyable. They are are all worth seeking out if you are looking for something different, and able to tolerate a few rough edges.

The games in question? Everybody's Gone to the Rapture, Cradle, and Submerged.

While the former is the one you've probably heard of (and clearly has the highest production value), I played all three in the space of a month, and they all reminded me of this particular game design challenge.

All three are exploration style games, where you explore a world, and try to piece together the story being presented. There is little to no 'combat' between them, and each takes a slightly different approach. Everybody's Gone to the Rapture is very much the pure walking simulator, with no real interactions to speak of, and is driven by it's narrative (brilliantly so I might add, it's marvelously designed). Cradle uses a first person view, a lovely aesthetic, and throws in old fashioned adventure game mechanics of 'collect this to do that' (and some odd Minecraft inspired mini-games). Submerged is a kind of platforming game in a flooded and sunken post apocalyptic city, where you seek out resources and discover pictographs, Journey style.

All three want you to be enthralled and immersed in the world they have created. They also share some fantastic visuals. Each of their worlds, whether it be the mundane English village of Rapture, or the tribal-cyperpunk of Cradle, the worlds presented are well presented and evocative of a certain mood.

They all succeed in presenting an interesting world. They also all suffer from one issue that always challenges the immersion of such experiences for me. Again, this isn't a deal breaker, you should play all three, but as a designer this one always get to me.

It's all about consistency. The rules of your world. How things behave and how I can interact with them. 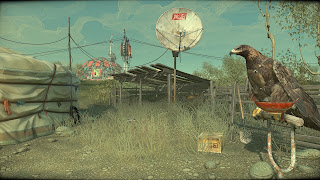 What am I talking about? Let me give you an example from early in Cradle.

There is a tree, and fruit growing in the tree, above your reach. The game tells you to find a stick or branch and throw it at the fruit. The games physics engine will take care of the rest. Cool, there are lots of branches around! However, what you soon discover is that only certain objects can be picked up. It's a lot of objects, you can in fact pick up a lot of junk in Cradle, but on this occasion only one of a dozen possible branches was able to be picked up.

The game want's you to pick up a certain branch, not any of the other loose looking ones. Nothing brakes the immersion for me more than a game that breaks it's own rules. 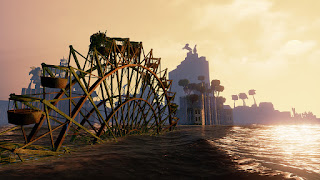 Likewise in Submerged, a game where you do a lot of climbing, it uses the Uncharted inspired mechanic of using red flowers to designate which ledges you can jump to. However, what it also has is a myriad of other ledges, at similar heights and distances that look for all the world that you should be able use. In this example even in a situation where the game has told you it's own 'rules' (in this case, red flowers means you can reach it), the fact the rules clash with what looks visually 'right' can seriously break the immersion that the game provides. 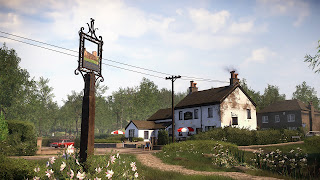 Two similar things got to me in Everybody's Gone to the Rapture, one was that in a game world where you walk pretty slowly (even with the 'sprint' function), there were several bicycles scattered around early on. Oh how much I wanted them to be usable! The game explained why I couldn't use a car, they had all stopped working due to the mysterious events of the games story, but a bike? Could my legs only work in a certain way?

For the most part the world of the mysterious Shropshire village of Youghton presented in the game is consistent. You don't climb or jump, you walk slowly around. However, two thirds of the way through it suddenly presented me with an audio log (radios that you search for throughout the game that reveal more of the story) that was 'hidden' in a barn, and accessed by climbing a ladder to an upper floor. No other ladder in the game had been climbable up until then, and while there would be one other (to access a treehouse) later on, the game had taught me to ignore that possible mechanic due to it's control scheme. Again, it jarred me out of an otherwise engrossing and immersive experience.

... as soon as it's not you might find your players frustrated and worried more about mechanics than your world. Your true goal in such a game is to try and make the player forget there are mechanics.

That said, go play all three! I love that experiences like this are being created, and finding a space, in an ever crowded indie market.