The Squid & the Moon 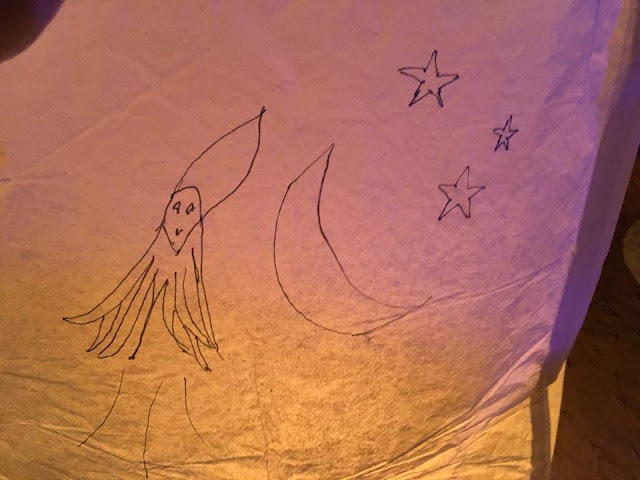 This is a picture of a squid jumping over the moon. Tradition may have taught generations of kids that cows generally do the moon jumping, but this one lets me write some meaningful words about something important to me.

This particular artists rendering of said squid, taking part in moon jumping, was drawn by wife on the side of one of our lanterns at the Rise Festival in the Nevada desert at the weekend.

Taking their inspiration from similar events in the far east, the event sees over 10,000 people launching lanterns into the night sky. Part of the idea of the festival is to come together and contemplate the good things in your life, mourn for those passed, or simply to share the experience with others.

It's a great event, and can be very inspirational. While maybe even a little melancholic, it's an emotional experience for all but the most hardened of cynics. Well worth the trip if you get the opportunity. You are also encouraged to scrawl messages on the lanterns if you want to. Hence the picture at the top.

So why a squid?

Let me back up a bit!

Squid was the nickname that my wife gave to the mobility scooter I have had to use since suffering my injury back in May. I suffered a badly broken and dislocated ankle playing soccer (my ankle was basically pointing ninety degrees the wrong way!)

We had to buy a mobility scooter so that I could get around at work while I recovered, I much preferred that option to a wheelchair, or having to use crutches all the time.

So it's been a tough road this year, and the support of everyone has been amazing. Words can't quite capture how mentally challenging a serious injury can be, even if it's just in terms of motivation and managing your own frustration.

Words of support from friends and family meant a lot, and everyone at work have been great (Blizzard really is a great second family), as have those I have met out and about. People have helped with doors, asked how I was doing, showed sympathy and support. I put on a brave face when I left the house. That people cared helped a lot. It might have seemed I was coping rather well.

Brave faces can be deceiving.

My wife was the one who had to deal with me at home. She had to deal with the frustrated me, the me in pain, the me that wanted to give up, wallow in self pity and generally just lament the hardship life had temporarily thrown at me. Even if my set back was to be temporary, it's still a hard adjustment, and comes with a lot of pain. So while that brave face was essential for work and such, it was only half of the story.

I was not always easy to live with, or to care for.

My wife never really complained or made me feel worse. She knew when to leave me alone and when to kick my but out of a stupor. She fetched, gathered, provided, and supplied me with what I needed. She put up with me at my lowest and always helped put things in perspective

Her strength gave me strength, and I didn't always make it easy. She never wavered. Maybe she did, and just hid it from me, but to me she was a rock.

It takes a lot of energy to care for someone with any kind of disability, temporary or otherwise, and we should all respect the effort and challenge that carers face.

So that's really the point I wanted to make in sharing this. If this experience made me acutely aware of anything, it's that you should always spare a thought for those giving care to others. They are usually having as much of a challenge as the one suffering, just in a different way. Their strength is important too.

If you can do anything to make life easier for a carer, you'll be doing a good thing. Even if it's just giving them some emotional support, I'll wager they'll appreciate it.

So we found ourselves in the desert, releasing our lantern into the night sky, and said goodbye to squid. 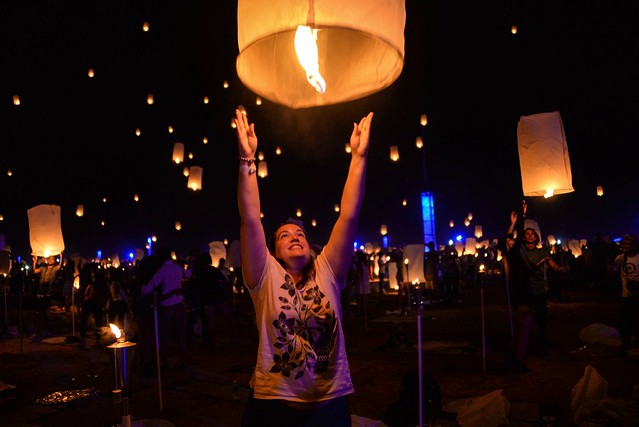 My wife is awesome, she helped the squid jump over the moon.
featured personal