My Favorite things in 2015 - Day Thirteen

on December 13, 2015
I've been a fan of the Telltale games for a while, but now I think they might have a hard time topping how much fun I had with this one! 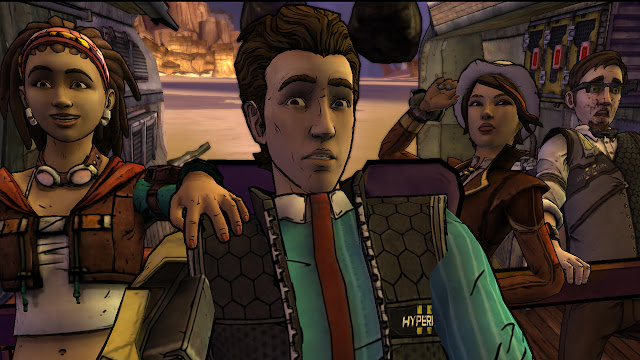 Tales from the Borderlands achieved one of the hardest challenges in game development. They made a genuine comedy, and had it work from start to finish. This game isn't just fun, it's truly funny.
The quirky and characterful shooter series might not have been the obvious choice for the Telltale adventure treatment, but it was an inspired one. You follow the misadventures of a couple of ambitious but clueless company men, and the pair of grifters they end up with on Pandora while trying to climb up the corporate ladder with a suitably harebrained scheme.

They manage to keep the tone light and humorous with an excellent script full of great one-liners and dialog. What's more they pull off more than their fair share of visual gags and pratfalls, which is a testament to the animation and performances.

At it's core however is a cast of characters as good, and as diverse as I can recall in a game. Even the random secondary and side characters have memorable moments, and you come to care for what is going to happen to this bunch of misfits.

It's light on the 'meaningful choices' elements that some of the Telltale titles offer, but it's really not missed here. The characters carry the entire affair effortlessly.

They also did some excellent intro sequences for each episode.

It was funny and heartfelt throughout, and fit the episodic format better than any of the other Telltale games to date. Each individual episode was well paced, and each had it's own memorable moments, but a couple of them were stellar (Episode 4 is hands down the best single episode Telltale has made to date in my opinion)

If you have even a passing interest in Pandora, and the world of Borderlands, you owe it to yourself to play this game.
games gaming Must Play