on December 03, 2015
Today we have not just the smartest science fiction movie I saw this year, but probably the smartest I've seen in quite a few. 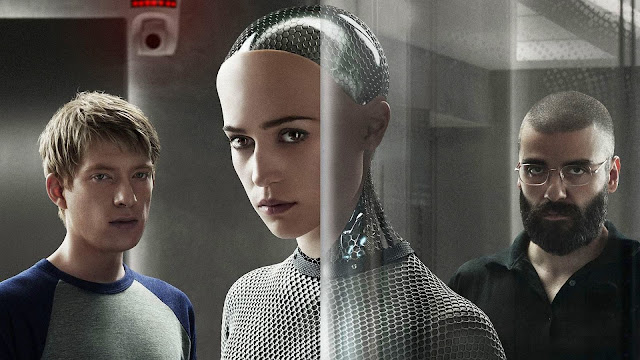 Ex Machina was the directorial debut of writer Alex Garland. He was responsible for books like The Beach and The Tesseract, as well as screenplays for the likes of 28 Days Later, Sunshine, and Dredd. It should be no surprise then that the script is tight and well paced, but the revelation for me was just how wonderfully shot and composed the movie was. Combine that with some stellar sound design and this was not just a great piece of science fiction, but also something the film nut in me appreciated on a whole other level.


The story revolves around a young programmer who is selected to participate in a groundbreaking experiment in artificial intelligence by evaluating the human qualities of a breathtaking female A.I. that has been created by his eccentric genius of a boss (Oscar Isaac turning in a fantastic performance).

Oddly enough for such a high concept piece in many ways it's framed a little like Charlie and the Chocolate Factory. Our hero, well played by Domhnall Gleeson, wins a competition at the company where he works to visit with his boss at his secluded research facility. Like Charlie, he serves as the audiences moral compass of the piece as he tries to figure out how to treat this new form of A.I.

Then there is the A.I.. Swedish actor Alicia Vikander gives a captivating and mesmeric performance as the cyborg creation Ava. It's her that the entire piece hinges on, and her relationship with the humans. She pulls the audience in, and intrigues us, just as she does the other characters.

The whole thing comes together brilliantly, from the deceptively clever use of their Norwegian setting (all remote and wide open) that contrasts superbly with the tight, claustrophobic, and clinical interiors. The visuals themselves are in conflict. It's wonderfully put together.

It asks interesting questions of memorable characters, and that's something I truly appreciate in my science fiction!