on December 12, 2015
Today we have the latest offering from director Matthew Vaughan, who has yet to direct a film I didn't like. 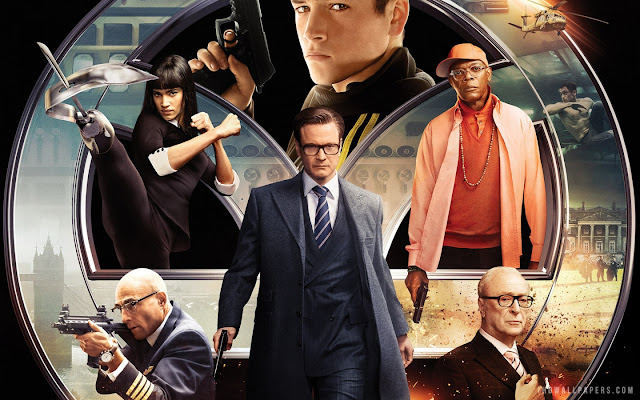 Kingsman: The Secret Service was everything the Bond franchise has forgotten how to to be, brought to the boil with a firm understanding of modern action movie tropes.

The story finds a London wild child, who had washed out of the marines, recruited to a secret spy agency by a mysterious gentleman spy (played brilliantly by Colin Firth). He is then thrown into the agencies training program, going up against the better trained and more 'upper class' recruits. It's playing with English class politics and the old 'upstairs / downstairs' cliches, but as with the rest of the film, it gets the tone right.

Predictably the stakes ratchet up as a new threat emerges.

Think of it like Fame meets James Bond, with a side order of  stylized violence and action sequences that would presumably make Tarantino smile. Those who don't like overblown cartoon violence in their live action might want to pass, there be various forms of dismemberment going on throughout.

The film knows what it's trying to be, and delights in taking it to next level. It know's it's all a touch exaggerated and absurd, and revels in it.

Also Samuel L Jackson was born to be a cartoon Bond villain, and he plays it here with a gleeful relish that is pitch perfect.

Honestly I enjoyed this way more than I did the latest Bond offering, Spectre, which wasn't a bad film in itself, but this was just way more fun!