on December 24, 2015
Today we have a look into the darker side of the Marvel Universe, and one where the villains steal the show(s) 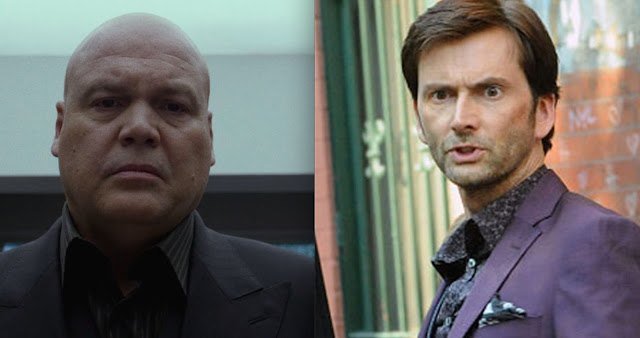 Netflix's new Marvel shows Jessica Jones, and Daredevil shows have been very well received. Taking a more mature and darker approach suited those properties perfectly. They both share one very important element however, they are driven by the brilliance of their villains.

I could talk about how good the two shows are (and they are), but for me the compelling part were the villains that they brought to life.

Jessica Jones' mind controlling nemesis Kilgrave, and the gangland Kingpin Wilson Fisk that Daredevil battles, are both very different kinds of bad guy. The former an unrepentant sociopath, the latter a more noble villain who knows he is on a dark path. Both make for excellent foils to the origin story for their respective heroes.

Both are grounded in fantastic performances. Vincent D'Onofrio in particular brings a gravitas to Wilson Fisk that paints a portrait of a tortured soul that may have been a better man under different circumstances.

David Tennant's Kilgrave also shares a tortured past, but has come out of it as an evil and twisted villain with no remorse. However, as is fitting for the character, Tennant plays him with a disarming charm that almost makes you forget he is a vile human being (well, at least until he does the next vile destructive thing)

The long form nature of both shows, with all thirteen episodes dedicated to just the one arc with just the one primary villain, benefits both characters. They get to move beyond the cartoon villains they are based upon, and allow fantastic actors to breath a depth into them that you don't often see in TV villains. Both help you appreciate the heroes journey that the show's protagonists have to go through. It makes the heroes of each tale better characters, because you understand the tensions between them.

I truly hope that the Netflix marvel shows keep to this formula and don't fall down the rabbit hole of Spiderman 3 syndrome, and try to come up with a plethora of villains to keep shuffling around.

It's far more interesting when we get well rounded villains with a bit of depth to them.

I'm all for the good bad guys!