on June 26, 2016
In clearing out the last of the unpacking after our most recent move, I found all of my old creative work from the 90s. Mostly material from my last year at school, and my college years. Made for an interesting trip down memory lane. 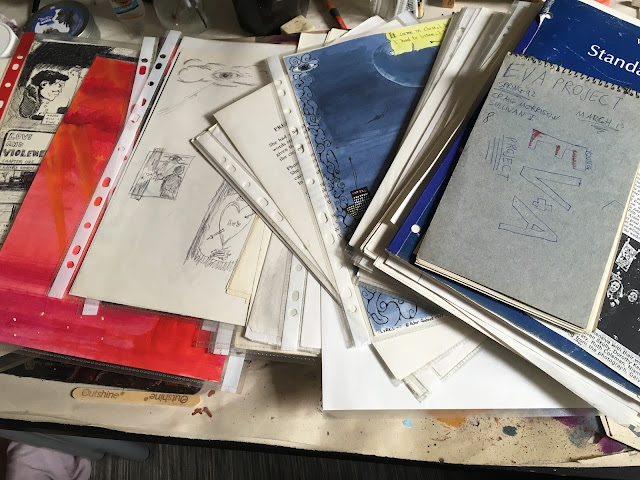 Teenage me was just as addicted to telling stories, he was just a touch more naive.

There was an old notebook from a project I got to do in my final year at school. An outdoor art exhibit. We made these large outdoor installations that were then displayed in one of the city parks.

We even got featured in the local paper, including a photo of a very, very, young looking me in my early 90s school uniform and denim jacket.

Spot a very young me! Think that Ev+A stood for European Visual Arts. It was an annual exhibit in the city. pic.twitter.com/R3EdDR8Zj6
— Craig Morrison (@Silirrion) June 25, 2016

The notebook! Apparently I planned a little better back then! Don't seem to have a pic of the finished piece tho. pic.twitter.com/9tSuZiwI3C
— Craig Morrison (@Silirrion) June 25, 2016

It is always a little weird seeing all the work that Sixteen year old me put together. (Albeit with a complete lack of copy editing!)

16 year old me also made comics I'd completely forgotten about! I wonder what the story was going to be? pic.twitter.com/dhPumRHzzf
— Craig Morrison (@Silirrion) June 25, 2016

This was possibly the start of my tendency to get 75% of a novel written before I got bored and moved onto another.

Oh look! An unfinished novel, it can join the collection of them adult me has also managed to start and not finish. pic.twitter.com/U4dbB5qcCk
— Craig Morrison (@Silirrion) June 25, 2016

I wrote a lot of poetry throughout this period, both because I wanted to, but also as a tool to fight through writers block when I was at college. In a surprise it isn't all awful. Maybe I should get it all transcribed into a digital format and posted somewhere?

There be a lot of poetry. Very much full of (relatively naive) teenage angst. Not all of it is awful. #memorylane pic.twitter.com/BlHoUs5KO6
— Craig Morrison (@Silirrion) June 25, 2016

Some of it I had completely forgotten about!

Apparently I went through a phase of illustrating my favorite song lyrics. Had totally forgotten about these. pic.twitter.com/bAuPKTCAPn
— Craig Morrison (@Silirrion) June 25, 2016

It's always interesting to look back through your old creative work and remember the person who created them. I'm happy that I didn't abandon the urge to create stuff (even if life slowed it down now and again).
art writing