on August 31, 2016
This month the bulk of my gaming time was spent on one game, and it was one that not everyone welcomed into their hearts. For me however, it was a compelling experience that I sunk over thirty hours into.

That in itself is a rare feat for a non-MMO for me. The only other titles to approach that amount of playtime recently were Rocket League and Witcher 3, both excellent games.

I'm talking about No Man's Sky. An awful lot of people out there will probably think me crazy! 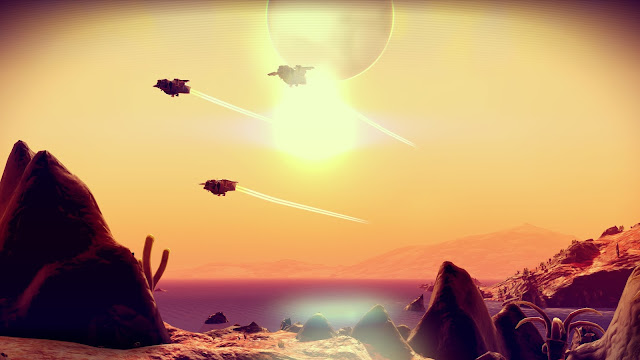 The game has been mauled in many parts of the internet for failing to meet the expectations generated by the hype around the game.

I imagine I enjoyed it specifically because I had no expectations.

Probably partly due to having some design production knowledge about how much a team that size could actually realistically produce, and partly because I rarely pay any attention at all to marketing hype. Marketing rarely has any correlation to the quality of a game. I'm not going to dive into that hornet's nest apart from saying that I stopped listening to game PR some time ago. Not that it hasn't got a role in raising awareness of a game, but after that I'm content to decide for myself if a game concept interests me enough to try, and then to play that game and form my own opinions.

So for what it actually is, rather than what it is not, I thoroughly enjoyed No Man's Sky.

The core loop of collecting resources to keep things running was solid enough, if lacking a little depth, but honestly for me it was simply that the experience of playing the game was enjoyable and relaxing. Even the maligned inventory system managed to act as a motivator for me. It pushed me along gently to explore more in order to expand my little stash of stuff.

I enjoyed exploring these worlds, seeing what was out there. I simply enjoyed the feeling of self directed exploration.

I didn't need a complex, player driven economy at the core of a space travel game (ala Elite Dangerous or even it's MMO cousin EVE). In fact I was welcoming of a game that did not place the emphasis there.

I didn't want a space combat game. Not in this game, it wasn't why I was playing it.

I found myself enjoying the small snippets of alien history I discovered. I enjoyed building up my knowledge of the alien races, and their histories. I'm not sure it paid off well enough, but it kept me happily exploring. The writing surprised me. I wasn't expecting to be interested in that element, but I was. In particular when I spent some time exploring a single planet that was rich in ancient sites from one of the races in the game.

Likewise seeing a game system use language was an expected, but welcome experience. It's always an area that I feel has been neglected in other space sims. I appreciated the pay-off for learning more words in the little multiple choice puzzles in the outposts.

I was playing this game to see what was over that hill. To see if I could uncover more of the alien history, to happily wander aimlessly around and see what I could find.

Yes, you can 'see through' the random algorithm generating millions of possible variations of something that feels vaguely similar once you've traversed a few of it's planets, but to me, none of that seemed to matter.

This is a game where, for me, that core exploration experience managed to elevate the game beyond the sum of it's flawed parts.

Now if you were someone who did want a complex economic simulation to be there, or for there to be meaningful and skilled space combat. No, this is not the game for you. If you believed the faces of the dev team promised you all that, I totally understand your frustration.

Likewise I'll freely admit that from a 'building stuff' sense, a game like Starbound (which I also adore!) has much, much, more depth and content than No Man's Sky. This game being in first person placed it in a different category of game for me. I was playing it for different reasons.

Those personal reasons are why I still enjoyed the experience of playing the game. It created planets for me to explore as I saw fit, and I appreciated that. I guess that in this case, I was just easier to please than most!

It's also important that you allow yourself to enjoy games that others do not. It is perfectly acceptable for a game to be enjoyable to you, and not to others. A game doesn't even need to be a 'good' game for you to enjoy it.

I did get a little time for a couple of other games towards the end of the month, and I am half way through the new Deus Ex at the moment, so those will wait for next month.

There is also the little matter of a certain something that might just take up some of my time!