on January 24, 2017
This weekend saw the annual Global Game Jam take place. I'm took part locally at UC Irvine. We had over a hundred people taking part here, as part of the tens of thousands participating across the world.

It's a lot of fun. I get a little extra out of it, as it presents an opportunity for me to work with some of the students I teach. It's always interesting getting to see them work on a game.

It's also somewhat of a microcosm of some good design practices that are worth remembering! There are nuggets for wisdom for regular development that a Jam replicates well. One of those areas that I always fall back on is how to brainstorm a new idea.

This advice is particularly pertinent to early prototyping and the genesis of a creative project, not just a game jam. So it's worth talking a little about how to approach brainstorming.

Doing an exercise like a game jam is a perfect opportunity to practice your brainstorm techniques.

Brainstorming is something that everyone pays lip service too, but very few actually manage to do it effectively. It's a hard thing, to fight the urge to dismiss potentially bad ideas immediately, or to have to neglect an idea in mind initially that dominates your discussions.

There are various strategies for good brainstorming, but this is what has always worked for me. Game Jams are a perfect place to practice this!

Firstly have the group list out as many ideas as possible. Every idea is valid at this stage, no matter how strange.

At this stage there are no bad ideas

There are no bad ideas.

This is important. 'No' is not part of this stage of the exercise. No 'ifs' or 'buts', just the ideas, not one of the million and one reasons why any given idea might be terrible. Just the ideas.

You're going to write each one down on a post-it. Think of a phrase to describe each idea or concept. This in itself is the first stage of evaluating the idea. Giving it a name, even if it's going to be discarded. For me this is actually an important part of the process. It helps with starting the process of identifying what might be fun in a concept, or how easy the idea is to shape into an 'elevator pitch' ... or in this case the Post-It note pitch.

Try and find a catchy memorable phrase to describe the idea. You'll want to be able to remember the concept behind each idea later.

Try to branch out, think about stranger and stranger ideas, see if anything grabs the imagination. Use prompts if you have to. Try not to dwell on a single idea at this stage. The idea is to generate as many ideas as possible

Do this for around thirty minutes, and you end up with something like this ... 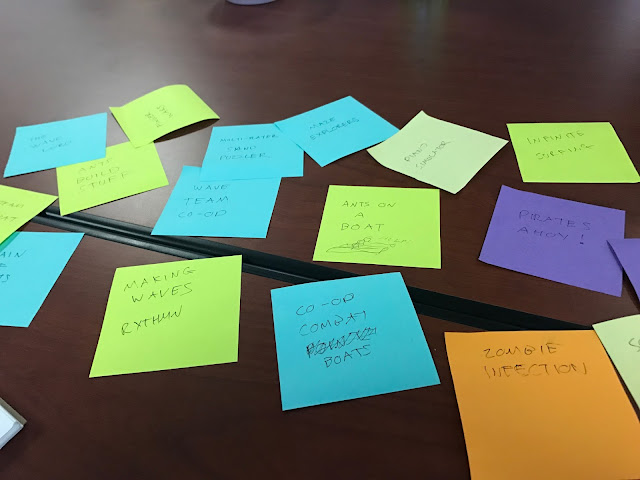 After that I like to take a break. In a Game Jam setting this is a perfect opportunity to head away from the site for a little, walk somewhere, get some food maybe, with the aim of getting to know your team better. It's an opportunity to find out some more about your partners, and is also time to allow the ideas you've just discussed to gestate in your minds.

In another setting it's enough to go for lunch, or simply just take a break. Either way, the idea is to give the concepts time to crawl into your brain and rattle around a little.

If possible though, go for a walk, even if it's just to go to grab food or something. Try to go as a group if you can.

As humans we tend to do some good thinking while we walk!

This break is a vital part of the process. It gives all the ideas and concepts some breathing space.

Coming Back to the Ideas

Then you regroup and start to discuss which of the ideas is resonating with the group the most.

From here you will want to do some kind of stack ranking of the ideas, don't immediately zoom in one. Let everyone speak to which idea is appealing to them. You'll usually find that people start to gravitate towards one or more of the ideas.

It also helps weed out some of the weaker ideas, you'll find you might not even remember what the concept was that a certain phrase describes. That's usually a good sign it wasn't a strong idea.

From there it's just a case of deciding which of those ideas is most suited to your goal, or the scope of the Game Jam, project, or prototype. The idea is to try to have established some form of consensus around what might make for the most fun and interesting game.

The Goal of Brainstorming

For me, one of the most important elements of good brainstorming is getting your team excited. You want to try to energize those taking part about the idea you'll pursue. This is equally true of a Game Jam as it is a professional project.

This is an important goal of true brainstorming. It allows all of the if, buts, and maybes to be processed and discussed. It allows people to zero in on a concept that everyone can get on board with.

In my experience it usually leaves you with an idea that no-one immediately jumped to at the beginning, but is forged by the process itself, and then the people around the table evolve it into something that excites them.

Make no mistake, good brainstorming is often hard. It isn't about pitching, or selling, your ideas, it's about finding the best ideas. That takes a degree of maturity, but I always find it worth the effort!

This isn't the only technique for brainstorming. Smarter people than I have written many, many, words on the subject, but this method has always yielded pretty good results for me.

The important part is to explore the ideas. You never know when one will grab you!