on December 11, 2018
As with Wes Anderson earlier on this list, in a year when there is a new Spike Lee movie, it is likely that said movie will be included in this list.

Blackkklansman is not about to buck that trend. 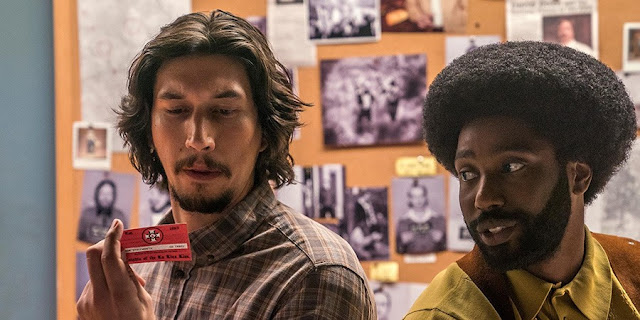 The film finds Lee at his very best. My soft spot for Inside Man aside, I think this may just be his best film since the seminal Do the Right Thing.

The original tale, of a black rural cop infiltrating the KKK was fantastical enough, but in Lee's capable hands the story of Ron Stallworth manages to be a period piece and sharply relevant in the current political climate.

The performances are grounded and relatable. Adam Driver continues to just knock it out of the park, and John David Washington does wonderful job in the lead role.

Lee's direction is both restrained and deliberate at the same time. It's almost a period piece in how it approaches its cinematography while still knowing when to use modern flourishes for dramatic effect. Lee has always fused his own sensibilities with those of a true cinephile, and this might be the best example of that to date.

In our real world it's staggering and sad that characters like David Duke are still relevant in 2018 (and Topher Grace does well with a role that was easy to overplay one way or the other.), so the film asks some uncomfortable questions of race relations in modern America despite it's 70s setting.

They are questions that need asking, and Lee is always ready and willing to ask them eloquently.