on December 12, 2018
Today's entry in the list of my favorite things of 2018 is the other big AAA console release to make this list.

Sony Santa Monica's God of War came in a close second for me to Spiderman, but it's still a game very much worth talking about in its own right. 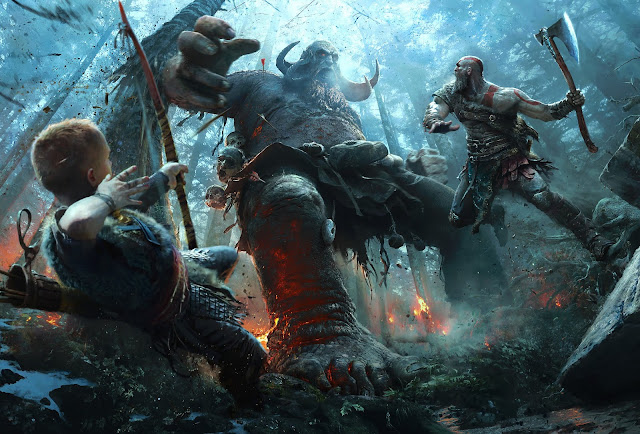 As a game designer there is a lot to love here. The amazing cinematic camera system, some really tight combat controls, and some simply breathtaking visuals throughout. This is without doubt one of the most impressive technical accomplishments of any year in gaming. (along with the major AAA release that didn't make my personal list in the form of Red Dead 2*)


As a player they got the ramp up of challenge just about right. While I might have desired a little more open world for my personal tastes, the largely linear levels were still well designed and flowed superbly. The power ups worked, although I tended to ignore most of the combos given some of the early ones worked perfectly well throughout.

Kratos' axe is a brilliant mechanic and I love the way they merged it with the controls, almost making it another entity itself. Thinking about where your axe was, and how to use that tactically added a neat extra layer to the combat mechanics
The voice acting was superbly cast, and the entire cast of characters seemed more interesting here than in any previous incarnation of the series.

I'll even forgive them for all the 'boy' memes.

It does everything the series is known for better than ever before. There has not been a game that better earns the 'epic' moniker. It knows how to do a set piece.

This one was everything a AAA game release should be for me.


* listen, I know most everyone else loved Red Dead 2. It is an amazing technical accomplishment. Beyond doubt. It tells a great story. Just for my tastes it failed to grab me as a game, largely down to the muddy and occasionally unresponsive controls. I mean I know the old west was dangerous, but it often felt like the controls just straight up wanted me to shoot everyone first, even when I was trying to avoid it. It's great that almost everyone else loves it. It's just not a game I enjoyed playing.