on December 20, 2018
I love myself a good horror movie, and the years best, and most suspenseful, came from an unlikely source. It's also not a horror movie in the same way that the genre has been trending in recent years.

The premise is simple, and the stakes are confined to a single family. Part of the movies brilliance is it's laser sharp focus. 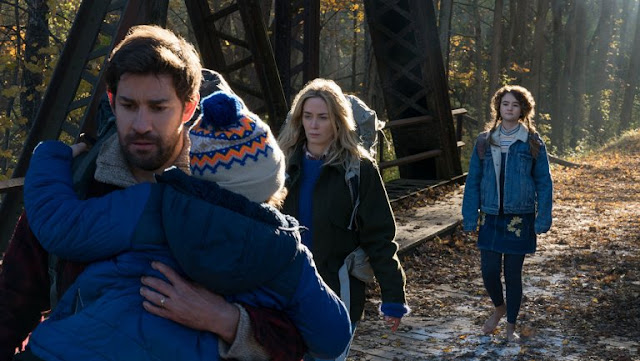 The film follows a family trying to survive after a civilization ending event, in a world inhabited by blind monsters with an acute sense of hearing. Making noise will get you killed. Like I said, the premise explains itself, but the movies effectiveness lies in just how well they weave the webs of tension and dread anchored around that core idea.

Directed by John Krasinski, he of Office fame, and who is currently playing Jack Ryan for Amazon, wrote the screenplay with Bryan Woods and Scott Beck. Nothing in his debut film, the coming home drama The Hollars, a couple of years ago suggested that he would so brilliantly dive into a genre film like this.

The film then takes that simple premise and ensures that every moment is saturated with the dread of what a mistake might mean. This is another one that doesn't need to over rely on its' monsters to be scary. The very idea of the monsters is scary enough.

This is horror film-making at its best.