on December 08, 2018
I wasn't sure whether I was going to love or hate this one. Coming from the same studio that made the brilliant, yet often infuriating, FTL, I didn't know if I was ready for another round of randomly harsh roguelike action when they released Into the Breach.

I needn't have worried. Into the Breach was a different beast altogether.

Yes, maybe that pun was intentional. 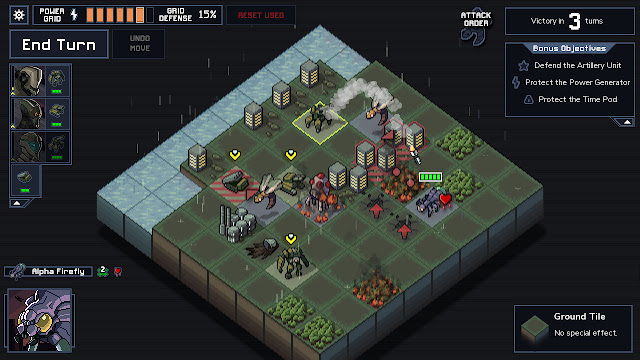 The turn based, Mecha versus Monsters, tactics game by Subset Games is a game that has distilled down all its elements into a superbly pure experience.

Each level takes place on small, eight by eight, grid maps, yet manage to remain challenging and interesting throughout. That is achieved by a rather brilliantly restrained sets of skills and abilities, that all manage to offer some relatively meaningful tactical variations. Its a neat lesson in design, in particular how integral they managed to make movement on maps that might seem too small to do so. In fact it's the small size that allows each movement choice to be so meaningful.

The roguelike elements encourage replays, at least until you unlock all the possible mech teams, and the different difficulties will keep you challenged for a while. It relied on RNG for challenge a lot less than FTL did, which for my tastes was a good thing.