on December 16, 2019
Tonight's entry on this list of my favorite things of 2019 is a little different. Rather than being a piece of entertainment it was an experience.

This year's vacation was a trip to Iceland, which is fantastic enough. However one of the activities we took part in was such a special experience that it was absolutely worth talking about.

On our very first day of the trip, while battling jet lag we got to experience a volcano up close and personal in a way that is impossible anywhere else in the world.

The Þríhnúkagígur (Three-Nuka-Geiger) volcano is unique in that it is the only known volcano to have survived it's eruption. 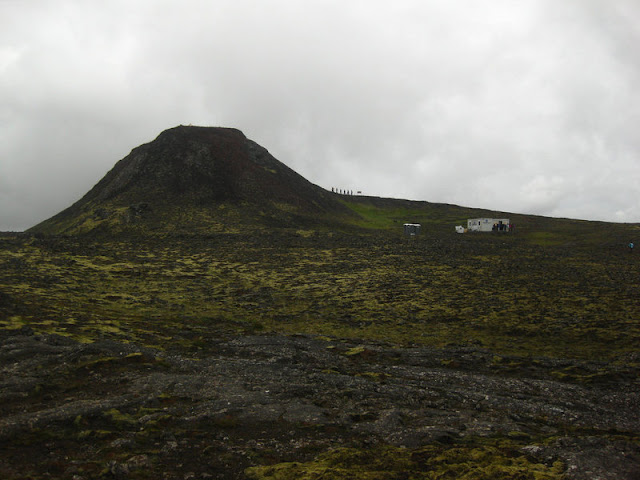 Usually, when a volcano erupts, the magma chamber is destroyed during the eruption and what is left is a crater. But this relatively small volcano mysteriously clogged itself and the magma drained out, preserving the magma chamber and cone. This means that now, it is possible to ascend down into that preserved magma chamber. As long as you don't mind a little hiking and have a head for heights.

So met up with a group of for a hike and trekked out across the couple of miles between the road and the volcano.

That's the volcano off in the distance. Even the terrain on the way is interesting, you can see lava tubes that hint at what lies beneath.

Then you reach the base camp, where the guides prep you for the descent into the volcano

Someone else had taken the easy way up there! 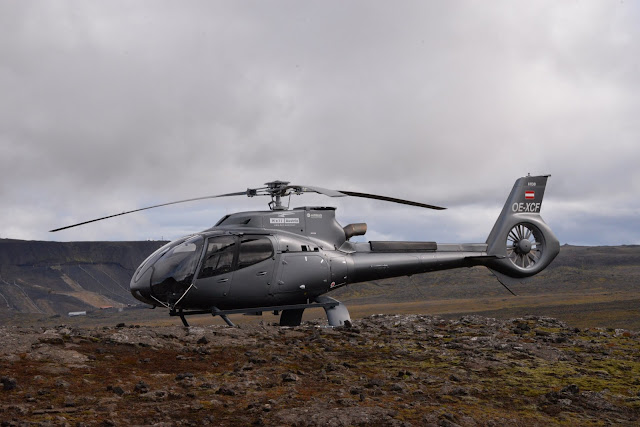 Once you are geared up, and have been given the safety instructions you trek the final few hundred meters up to the top of the volcano. There you find the converted window cleaning rig that will help you descend down into the chamber.

How far down exactly? They have a helpful graphic to show you exactly how deep you are about to go. Þríhnúkagígur (Three-nuka-geegr) means 3 Peaks. This volcano erupted roughly 4500 years ago. For scale, this picture shows the Statue of Liberty (minus her pedestal) and Hallgrímskirkja, the famous church in Reykjavik that is amongst the largest structures in Iceland. Translation - The chamber is immense and no photo can do it justice! 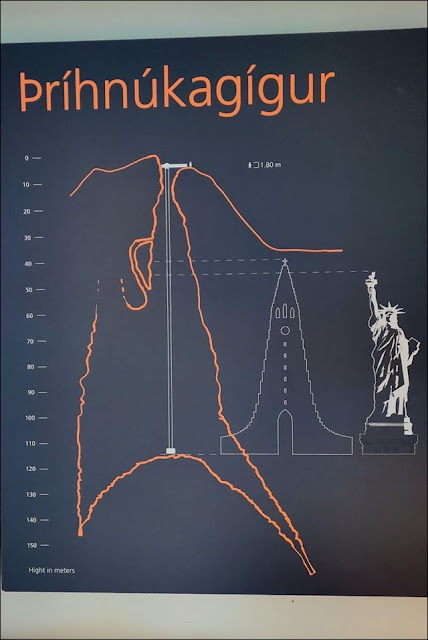 We descended 450' / 130m into the magma chamber and were able to witness the fascinating geology. 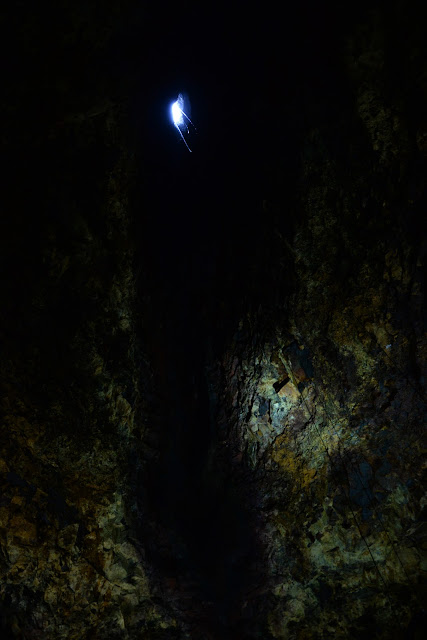 It's a long way down! I don't usually do well with heights, but I had resolved to do this, and I don't regret it at all. It was well worth a little anxiety to get to experience this.You're deep enough that if they switch off the lights, you'd be in pitch black. 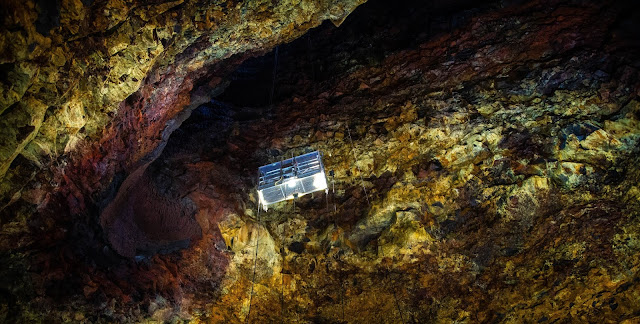 There is something incredibly special about being this deep beneath the earth, let alone in a space that really shouldn't even exist. The colors are gorgeous and created by the different gasses and extreme heat during the eruption. 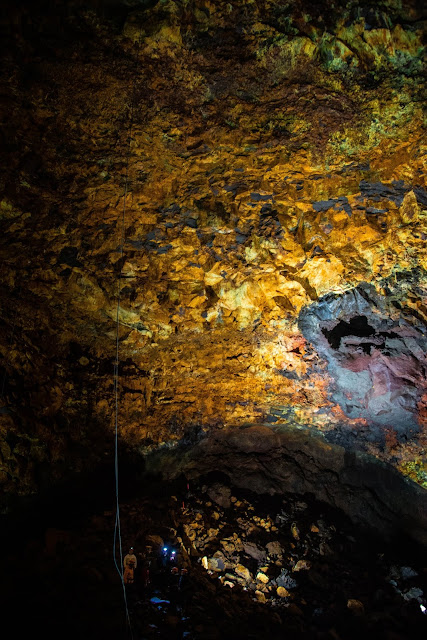 People down at the bottom there for scale! 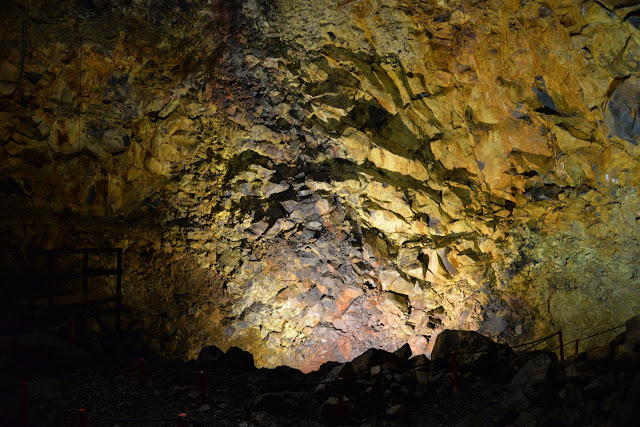 No photo treatment needed. This was the actual color of the rock down there.

Honestly pictures can't do it justice, but damn it, I tried!

You don't get long at the bottom of the volcano, but its enough time to traverse the chamber, look around, get some pictures, and get a sense of this truly unique place on earth.

There is just something special about being down there. It is testament to the power of nature, gives you a sense of the scale of time, and has the unavoidable sense of going somewhere you're not supposed to get to see.

There is a magic to the place.

A hidden place, somewhere the earth should have reclaimed but did not. One of natures little miracles.

This was a truly humbling experience.

Then you ascend back up in the rig, and trek back to the base camp where they feed you some lunch or dinner before the hike back to the transport.

We got a special bonus too. The base camp had a new friend when we visited. A native arctic fox cub had been making friends with the tour guides and didn't hesitate to come up and say hello. 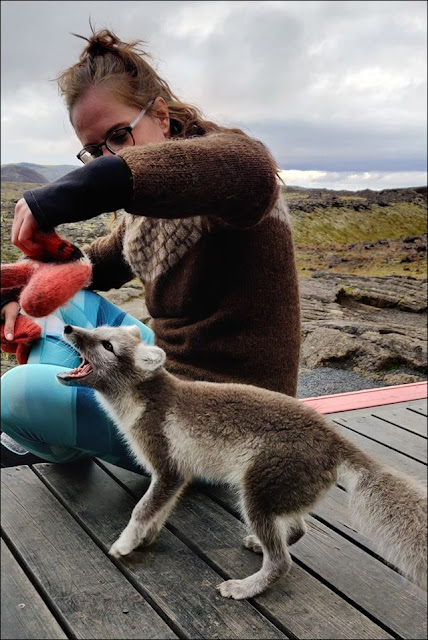 The site is just 13 miles outside of the Icelandic capital, Reykjavik, so is easy to get to if you are visiting the country. The tour down to the volcano is not cheap though. It's a little over $350 a person for the experience, which obviously is not a cheap addition to an already pricey vacation, but if you can afford it, it is genuinely a unique experience that you literally can't get anywhere else in the world.

You can find all the details here.

We almost didn't do it due to the cost, but I am so very glad we did. It is such an amazing experience I can still whole heatedly recommend it, even at that cost.