on December 02, 2019
Today's entry in the list of my favorite things of the year is a Netflix show that was an unexpected pleasure.

Sex Education was a whole lot more than just a 'sex comedy', although it absolutely is that, the prudish won't like this one, it's explicit. It builds its story around its charming characters who you immediately relate to, despite everything being exaggerated and ever so slightly surreal.

The shows entire production values double down on this. The setting is a weird hybrid of a US high school and a UK school with a presumably English setting that is never named, so could be anywhere. The art direction has an aesthetic that is both simultaneously contemporary and trying to evoke the 1980s. It probably shouldn't work, but does. 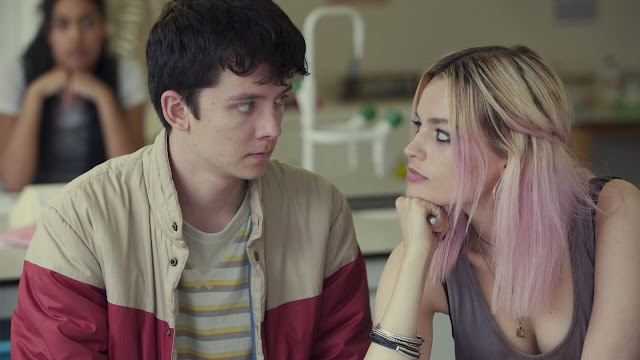 The cast is pretty pitch perfect too. The 'teens' all manage to embrace the genuine awkwardness of the concept while also being, well, believable teenagers. Angst and ideals about love, life, and sex, all mushed together.

The adults are just as good, and this show is another reminder that Gillian Anderson is a treasure.

It is funny, heartwarming, and isn't afraid to leverage all the usual high school story tropes to subvert and tell its own story. It's a story about friendship, growing up, and learning to relate to the opposite sex, with all the pitfalls that come from that.

It is awkward, funny, and even occasionally sweet, while also telling mature stories that hinge on a harsh dose of reality that ground things. It's that combination that elevates this one above your regular teen comedies.