Fallout 76 was not greeted kindly by the internet. It had a whole bunch of expectations working against it.

It wasn't a 'real' Fallout game they declared, which in some ways is indeed true, but also missed the point.

I think I sank more hours into this one than I had into any Fallout game since Fallout 2 way back.

I actually think that Fallout 76 nails the the fantasy of these games better than any of the previous installments. If anything I felt that not having a population of NPC made the game feel more

It also paved the way for some of the absolute best instances of environmental storytelling I have seen in modern games. Give a designer a limitation like 'there can be no other people' and it challenges them to double down on what they can do. For me, the solutions that they found here really worked. I found the world they created here to be both believable and interesting.

I played through some great 'quest' style sequences without needing to interact with a single NPC, or be lead by a single glowing trail or quest marker.

Honestly, even if the game isn't for you, there are some very useful design lessons on display here when it comes to environmental storytelling. 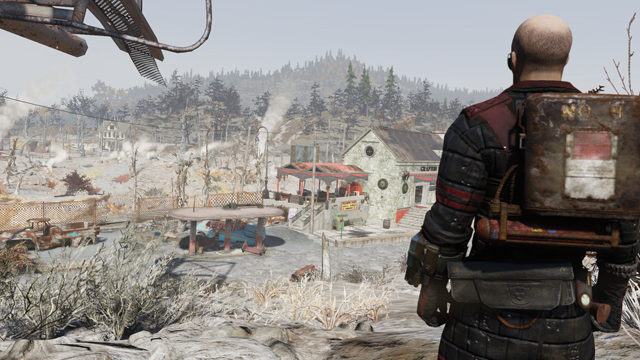 The survival-lite game-play also landed squarely in my personal tastes when it came to difficulty. Just balanced enough to make me think about spending my resources, without forcing me to run out of options when in a tight spot.

Even the base building scratched that itch in just the right way for me.

All those things combined to keep me happily exploring this post apocalyptic stretch of West Virginia.

In many ways, because I didn't have to approach it as an RPG to level up within and chase down a story, I treated this as pure exploration, and the experience was all the better for it. I kept discovering cool new things and interesting vignettes.

I will concede that I'm not totally sold on it's value as an ongoing service. Once I had explore all of the map the excitement waned for me, but that was after I had played well north of a hundred hours of the thing.

So maybe this was engineered to fall just right into the Venn diagram of my personal tastes, and I'm a small minority of players, but I had a lot of genuine fun with this one. That's always priceless for me.